He walked quietly into the entrance hall where only one light was turned on. The whole house was dark except for the table lamp which was dimly lit casting a shadow across the hallway. As he walked in, a light yellow piece of paper caught his attention right away. It was staring him right in the face as he opened the door. It was placed neatly on the silver tray on the entrance hall table in his home in Knightsbridge, an exclusive residential and retail district in Central London within walking distance from Hyde Park and Harrods. It was odd that there was something on the silver tray.

Mr. Granger, his butler, a man of medium height about 5’10” with a round face and bespectacled and an air of authority, delivered his mail to him on the silver tray when they came in during the day but usually nothing at night. He remembered telling Mr. Granger not to wait for him when he left his house earlier that evening to go to the 1927 Spring Ball at Grosvenor Square. He knew he would be very late. It was now almost two o’clock in the morning. Mr. Granger must have left the yellow piece of paper on the silver tray knowing he could not miss it when he came home.

Spencer Wentworth had too much to drink at the party and too inebriated to comprehend what he saw. With difficulty, he picked up the yellow piece of paper gingerly, opened it and tried to focus his eye. It was a telegram. He started to read.

The telegram said, “COME HOME STOP URGENT STOP”. Just five words, so powerful in their brevity. He stared at them and frowned, his mind slowly absorbing what he read. It was not what he expected to see coming home late at night. He read it one more time. “COME HOME STOP URGENT STOP”, it said. There was no explanation and no denying it was urgent. It said so. He looked at the signature. He thought it might be from home, from his father, George Wentworth Jr. but it was not. The telegram was signed by their family lawyer, Alistair Prescott. “Why would Prescott send me a telegram? What could be so urgent?” He wondered what it all meant.

It was dark and quiet. Not a sound could be heard. Everyone was still sound asleep. Out of habit, she got up early and quietly pushed the mosquito netting out of the way, afraid to wake up her husband who finally went to sleep after a restless night. She listened intently but could not hear any sound coming from the other rooms where her children were sleeping. A good sign. She wanted to tackle some of the tasks on her list before dawn without distractions. If she could accomplish half of what she wanted to do today before everyone woke up, she should be in fine shape.

Regina Buendia, always so fastidious about her appearance, was still a slender and pretty young woman in spite of having delivered nine children. In her flowered nightgown and with her hair loose down her shoulder, she looked in her twenties and acted like one with her boundless energy but with a mature outlook in life. She tiptoed out of her bedroom like a thief in the night. Outside her bedroom door, she lit up a kerosene lamp, picked it up and walked down the hall to her workroom. There was so much for her to do before Christmas which was only a few days away. She was being pulled here and there and she had to make sure everything was organized properly. The maids would take care of the household chores but they still had to be told what to do. In a big family with nine children like hers, things could get chaotic as holidays near.

Her husband, Eugenio, was another matter that she had to deal with on this busy morning. He woke up in the middle of the night and complained that his stomach hurt badly. She heard him moaning and groaning all night. He was in bad shape from the look of him. He was always in good spirits and in good health but not today. She could sense it. He must be really hurting to complain so much. She did not think he could be of much help to anyone today if his pain persisted. He might even need some help himself with what he had to do. This unfortunate situation could not happen at a worse time.

The Iron Butterfly is now available at http://www.amazon.com/author/rosalindarmorgan. Purchase your copy today! 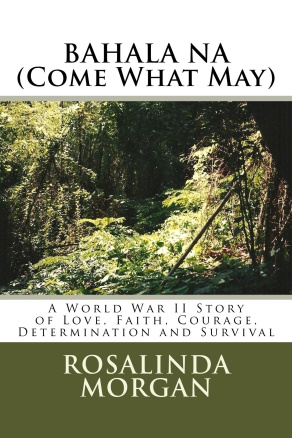 BAHALA NA (Come What May)

It was a sunny bright day on December 8 in Sambat, Bauan. There was not a cloud in the sky, not a hint of pending disaster. Adelaide and her eldest sister, Marta prepared to go to town and deliver the finished product to their distributors. With their bundles of goods, the two of them took a calesa to transport them. They got to town without any problem.

At around noontime, at a small barrio near Batangas, a couple of hundred miles from Manila, Adelaide and her sister just finished their deliveries of some textiles to their distributors and were heading out the door when someone came rushing into the shop and almost knocked them over.

He breathlessly said, “The Japanese just bombed Clark Air Base and Baguio.”

Adelaide and Marta turned around.

The man said breathlessly, “I heard it on the radio. The Japanese bombed Clark and Baguio.” The man repeated.

“O my God!” She made a sign of the cross and watching her, Adelaide thought the lady owner was going to faint. The lady owner sat down and asked for a glass of water. The man went to the back room to get some water from the earthen jar.

Adelaide looked at her sister who was as shocked as she was. The man came back from the back room with the glass of water. Marta signaled to Adelaide and she and Adelaide said goodbye and hurriedly headed toward the door. They walked a couple of blocks trying to find a bus to take them home to Sambat. They went to the bus stop. Few people were milling about. Marta asked one of the women who was standing nearby and talking to somebody else.

“Excuse me, when do you think the next bus to Bauan is going to be?”

“I don’t know,” the lady answered.

“I understand there is no bus service today,” the other lady said.

“All the buses are taken by the army.” The lady felt sorry for the two young girls. “Maybe you can find a calesa instead.” She pointed in the opposite direction and said, “Go that way, sometimes there are some calesas standing there.”

Marta took Adelaide’s hand and they walked in the direction that the lady pointed as fast as they could. They saw a couple of calesas about to leave. They were full and would not take another passenger. So they waited. And they waited. After half an hour, another calesa came by finally. There were seats available but it won’t take them to Sambat. They would only go to Bauan market. Marta looked at Adelaide. Adelaide nodded her head. They took it anyway. They got into Bauan market and there was a big commotion around. They had to get another calesa to take them to Sambat. They waited and waited. But no calesa was coming.

Adelaide was getting nervous. Adelaide asked her sister, “Why don’t we just start walking? It would probably be faster.”

As they were starting to walk, they saw a lot of people doing the same thing. There were very few calesas on the road. No buses at all. They kept on walking with Adelaide’s braid swinging behind her. Then suddenly Adelaide stopped, pulled her braid over her shoulder, fingered the tip of it. Marta looked at her. “What’s the matter?”

Adelaide blurted out, “The man said Baguio was bombed. I wonder where the bombing was in Baguio.” She had been thinking about it ever since she heard the news but was afraid to ask Marta. Finally she could not keep it to herself anymore.

“We forgot to ask the man.” Marta could feel the anxiety on Adelaide’s voice.

“Benjamin is there.” Adelaide was trying very hard to suppress her anxiety.

Her sister caught on quickly. “Yes, I know what you are thinking but we do not know exactly where the bombing was. The Japanese probably were attacking just the army bases. I don’t think you should worry.”

“I am not worried,” Adelaide lied.

“Do you think the Japanese will kill the civilians?”

“Hard to tell. If they were on their way, they could be killed.”

“Benjamin is in Mankayan. I don’t know how far that is from Baguio.”

“I don’t know either. Let’s just hope he has the common sense to stay away from danger.”

“I wonder how long this war is going to be.”

BAHALA NA (Come What May) is now available at http://www.amazon.com/author/rosalindarmorgan. Purchase your copy today!