When I was young, I dreamt of seeing the world. Coming from the back country of the Philippines, I was curious to know what other places look like. I did not get out of Batangas, my home province till I went to college in Manila. I always had that nagging feeling to go abroad and widen my horizon.

When I went to college, I thought of majoring in Foreign Service or Journalism so I could get out of the country. But Dad got a different idea and I ended up in Accounting. He needed an accountant in the family. But that did not thwart my dream of going abroad. I pursued my dream and in 1966. in spite of my fear of flying, I left the Philippines on my first trip abroad when I went to Hongkong and then Japan. There’s an interesting story about that trip which should be an interesting post for later. A year later, in 1967, I left for New York.

While working in the business world, I had no time to read. So fast forward to 2011 when I retired to South Carolina. I started reading in earnest. Here are a few of the books I read which took me to interesting places:

3.     A Woman of Substance by Barbara Taylor Bradford – England

6.    Helen of Sparta by Amalia Carosella – Paris and Troy

8.    Raised from the Ground by Jose Saramago – Portugal

9.    Winter of the World by Ken Follett – Germany, England, Russia and Washington DC.

11.  One Day in the Life of Ivan Denisovich by Aleksandr Solzhenitsyn – Russia Federation, Soviet Union

15. The Spy Who Came in from the Cold by John le Carre – England, East Germany

19.The Fall of Japan by William Craig – Okinawa and Tokyo, Japan

24.    Being Mortal: Medicine and What Matters in the End by Atul Gawande – India and New York

26.   Inside the Dream Palace: The Life and Times of New York’s Legendary Chelsea Hotel by Sherill Tippins – New York

30.  The Only Way to Cross: The Golden Era of the Great Atlantic Liners – From the Mauretania to the France and the Queen Elizabeth 2 by John Maxtone-Graham. – Atlantic Ocean Voyage

There you have them – 30 of my most memorable books that I read and travelled worldwide. I hate plane rides and ocean voyages but I have travelled the world through books, experiencing new authors and cultures along the way. I will keep on reading because as Irwin Shaw said, “There are too many books I haven’t read, too many places I haven’t seen, too many memories I haven’t kept long enough.”

Until next time. Stop and Smell the Roses.

See the giveaway details
at Goodreads.

Don’t miss the chance to win a signed copy of “The Wentworth Legacy” by Rosalinda R Morgan at Goodreads Giveaways. Enter for a chance to win now. Giveaways ends on Feb. 28 at 11:59 pm. Open only to Goodreads members in U.S.

“This plot-driven, emotionally complex tale effectively details Spencer’s determination to sacrifice his own happiness in favor of his family’s success. An engrossing love story. . . ”  – Kirkus Reviews

An urgent telegram from his family’s attorney to come home immediately interrupts Spencer’s carefree life in England in 1927. Spencer A Wentworth, a scion of an old wealthy banking family of the New York Gold Coast in Long Island, returns from a three-year Grand Tour with a big surprise waiting for him that he is not prepared to handle. Thus begins a series of events putting pressure on his personal life. With the stock market about to collapse, he can lose everything including Wentworth Hall, his ancestral home which he was determined to save at all cost even if it means losing the only woman he loves.

When I heard about the hullabaloo about the Women’s March, I could not help thinking about my grandmother portrayed in my book called “The Iron Butterfly”

Unlike the boisterous women some of the marchers were, my grandmother tackled the equality rights silently some 90 years ago when equality rights were still unheard of. She had nine children to support when her husband died and left penniless. She did something about her situation. She worked hard and tackled the business world heads on where men still ruled the business world but doing it with grace and her dignity intact. She did something about it without sacrificing her image, a gentle lady with poise and a determined mind and spirit to do what is right for her family. She did not go out on the street whining and demanding to be treated like men. She was a different kind of feminist.

Using vulgar language and making threats are not the ways to make a point. They make women look bad in the face of the world. Working hard and being the best you can be are the only answers to be successful and be heard. I’m glad I was not part of the Women’s March.

Until next time – Stop and smell the roses. 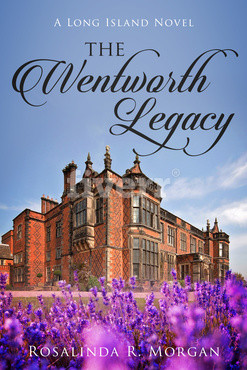 In 1927 while on a Grand Tour, Spencer A. Wentworth, a young scion of a wealthy old banking family of Long Island, New York Gold Coast, receives an urgent telegram to come home immediately. No explanation. Upon arriving home, he was handed a huge responsibility that he was not prepared for.

As the stock market begins to collapse, he is plagued with worries that the family will lose everything including Wentworth Hall, his ancestral home. Honoring his promise to preserve it, he is determined to save Wentworth Hall at any cost.

His sister, Emma, caught in a love triangle with a married man who ends in a tragic death has her own worries to save the family reputation.

It is a tale of responsibility, love, betrayal and suspense during the Gilded Age with a backdrop of a way of life long gone.

Take advantage of the Kindle Countdown Deal and get your copy today!

The Goodreads Giveaways for The Wentworth Legacy ends tonight at 11:59 pm, Nov. 3. Enter now to win one of 3 signed copies of The Wentworth Legacy, a Long Island Story. It is a tale of responsibility, love, betrayal and suspense during the Gilded Age. Reminds one of Downton Abbey except this is on U.S. soil.
https://www.goodreads.com/giveaway/sh…

Here is my 12th and final report for my twelve weeks challenge:

1. I made my reading goal for my 12-week challenge. I finished two books this week which means I’m also on track with my Books To Read in 2016 Challenge for Goodreads.

2. However, I did not make my marketing goal of 70 items this week. I only make 34 marketing promotions this week. But I did something important this week. I redesigned my website. I like the new design. Take a look at www.rosalindarmorgan.com and tell me what you think. My Giveaways post on Goodreads have 768 total so far, a gain of 414 entries this week alone. “To Read List” has 308 entries to date, a gain of 172 entries this week alone. The Goodreads Giveaways end tomorrow, Nov. 3 at 11:59 pm. Enter to win one of three signed copies of The Wentworth Legacy.

3. I did not make my word count challenge. I tried but I finished the challenge at 48,506 words. I’m happy I made it this far. But yesterday I decided to do the NaNoWriMo, the National November Writing Month challenge. I have done it the last three years and was able to publish two of my NaNoWriMo novels, The Iron Butterfly published in 2015 and The Wentworth Legacy published in 2016. All are available at www.amazon.com.

An urgent telegram to come home interrupts the carefree life of Spencer A Wentworth, a scion of an old banking family of the New York Gold Coast in Long Island, that can change his life forever when he returns from a Grand Tour. Thus begins a series of events putting pressure on his personal life.

With the stock market about to collapse, can the family save the family fortune including Wentworth Hall and retain their way of life as the country gets deeper into the Great Depression? As Spencer struggles with his financial problems, he has to find a way to save his legacy at all cost even if it means losing the only woman he loves.

A tale of responsibility, love, betrayal, and suspense during the Gilded Age.

“The Wentworth Legacy” is available now at amazon.com

3. I’m still trying to catch up on my word count challenge. I’m only at 44,355 words. I only have a week to catch up. This will be a tough order but I just keep on plugging along. My mind has been preparing for the NANOWRIMO in November so I’m not concentrating on this one. We’ll see what happens next week.

Here is my fifth report for my twelve weeks challenge:

See you next week.

Author of The Wentworth Legacy

Countdown is on. We have 10 days before the launch of “The Wentworth Legacy”. I’m so excited to see this book in circulation. It has been forming in my consciousness since the 80s when I became aware of my surroundings, having witnessed how the other side of the track lived.

Have you ever heard about the Gold Coast of Long Island? You must have. Do you remember “The Great Gatsby”? Well, that whole area of the North Shore of Long Island is famous for big estates during the Gilded Age? It is the setting of “The Wentworth Legacy”.

So get ready for a good read. If you cannot wait for the paperback, you can pre-order your Kindle copy at http://www.amazon.com right now.