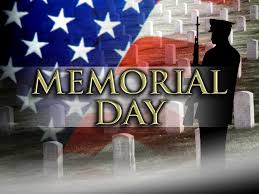 Lest we forget, Memorial Day is a day of remembrance for those who have died in our nation’s wars.

Established in the 1860s during the American Civil War, Memorial Day tapped into the general human need to honor our dead who have done so much to serve this great country.

Memorial Day originated in a ceremony called Decoration Day in 1868 was originally observed as a memorial by the northern states to the Union soldiers who died in the Civil War.  Memorial Day became a federal holiday in 1971 and has been an annual tribute to those who have given their lives in service to their country.  May 30th was initially designated as Memorial Day but an Act of Congress moved Memorial Day to the last Monday in May which this year is May 29.

The day has and always should be a day when we all take a moment to honor and reflect upon these men and women of the armed forces who have made the supreme sacrifice in times of wars to protect our freedom.  They perished in service to their country and for each and every man, woman, and child who calls the United States home.

One thought on “MEMORIAL DAY – A DAY OF REMEMBRANCE”