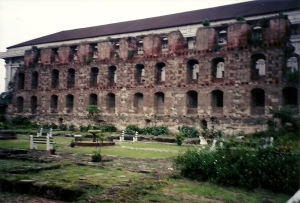 It seems like cities built walls around them for fortification against invaders and attacks during local uprisings by its own people. China has the famous Great Walls of China. Rome has the Aurelian Walls built between 271 AD and 275 AD in Rome, Italy, during the reign of the Roman Emperors Aurelian and Probus. England had the walled city of Londinium during the Roman times. Quebec had walls surrounding Old Quebec. New York had earthen walls on the northern boundary in the early days of its history which is the reason downtown New York has Wall Street today. Intramuros (a city within walls) was built in Manila in the 16th century by an Spanish explorer, Miguel Lopez de Legaspi.

Intramurous was a medieval European-style walled city laid out as a pentagon but with its uneven sides, it more resembles a triangle. Originally, the seat of the Spanish empire was in Cebu but was later transferred to Manila. Before the walls were fortified, the city was attacked by Lim Ah Hong, a Chinese  trader. They were almost successful. Formerly surrounded by wooden palisades, Intramuros was fortified with massive stone walls after the attack to thwart future attacks from foreign legions and also from Filipinos who were unhappy due to the unjust treatment towards them by the Spaniards. Later on, a moat was added in 1609.

Following Legaspi’s blueprint for the capital, succeeding Spanish governors built imposing churches, chapels, and convents. The most imposing building was the Manila Cathedral, a Romanesque structure constructed of adobe. Inside were statues by Italian artists of various saints that Manileños paid special devotion. Among them were: St. Andrew the Apostle, on whose feast day in 1574, the Spanish repulsed the attack from the Chinese invaders, and St. James the Greater, patron saint of Spain and the Philippines. Another prominent church was San Agustin Church, the only structure in Intramurous not bombed in World War II. The church façade is noted for its combination of styles with Doric lower column and Corinthian upper column with twin towers, one of which became the victim of earthquakes in 1863 and 1889. The main door is carved molave, a Philippine hardwood with panels depicting St. Augustine and his mother.

The Spanish governors also built schools, a hospital, grand government offices, printing press, university, palaces for the governor-general and the archbishop, soldiers’ barracks, and opulent houses for the assorted elite: the Spanish and their mestizo offsprings. Natives were moved to other areas, and immigrant Chinese were required to live outside the walls. The city’s seven gates were closed by drawbridges at night.

Copyright © 2014. By Rosalinda Morgan, author of “BAHALA NA (Come What May) – A WWII Story of Faith, Love, Courage, Determination and Survival”.

All rights reserved. INTRAMUROS – A CITY WITHIN WALLS IN MANILA.

If you missed the Kindle Countdown promotion of my book on Jan. 27-31, 2014, you can borrow “BAHALA NA (Come What May)” at Kindle Lending Library anytime.