It seems like cities built walls around them for fortification against invaders and attacks during local uprisings by its own people. China has the famous Great Walls of China. Rome has the Aurelian Walls built between 271 AD and 275 AD in Rome, Italy, during the reign of the Roman Emperors Aurelian and Probus. England had the walled city of Londinium during the Roman times. Quebec had walls surrounding Old Quebec. New York had earthen walls on the northern boundary in the early days of its history which is the reason downtown New York has Wall Street today. Intramuros (a city within walls) was built in Manila in the 16th century by an Spanish explorer, Miguel Lopez de Legaspi.

Intramurous was a medieval European-style walled city laid out as a pentagon but with its uneven sides, it more resembles a triangle. Originally, the seat of the Spanish empire was in Cebu but was later transferred to Manila. Before the walls were fortified, the city was attacked by Lim Ah Hong, a Chinese  trader. They were almost successful. Formerly surrounded by wooden palisades, Intramuros was fortified with massive stone walls after the attack to thwart future attacks from foreign legions and also from Filipinos who were unhappy due to the unjust treatment towards them by the Spaniards. Later on, a moat was added in 1609.

Following Legaspi’s blueprint for the capital, succeeding Spanish governors built imposing churches, chapels, and convents. The most imposing building was the Manila Cathedral, a Romanesque structure constructed of adobe. Inside were statues by Italian artists of various saints that Manileños paid special devotion. Among them were: St. Andrew the Apostle, on whose feast day in 1574, the Spanish repulsed the attack from the Chinese invaders, and St. James the Greater, patron saint of Spain and the Philippines. Another prominent church was San Agustin Church, the only structure in Intramurous not bombed in World War II. The church façade is noted for its combination of styles with Doric lower column and Corinthian upper column with twin towers, one of which became the victim of earthquakes in 1863 and 1889. The main door is carved molave, a Philippine hardwood with panels depicting St. Augustine and his mother.

The Spanish governors also built schools, a hospital, grand government offices, printing press, university, palaces for the governor-general and the archbishop, soldiers’ barracks, and opulent houses for the assorted elite: the Spanish and their mestizo offsprings. Natives were moved to other areas, and immigrant Chinese were required to live outside the walls. The city’s seven gates were closed by drawbridges at night.

Copyright © 2014. By Rosalinda Morgan, author of “BAHALA NA (Come What May) – A WWII Story of Faith, Love, Courage, Determination and Survival”.

All rights reserved. INTRAMUROS – A CITY WITHIN WALLS IN MANILA.

If you missed the Kindle Countdown promotion of my book on Jan. 27-31, 2014, you can borrow “BAHALA NA (Come What May)” at Kindle Lending Library anytime.

The kitchen is the central part of some homes where family congregates. In a traditional home in the western world, the wife usually does the cooking with few exceptions. She spends much time in the kitchen so the kitchen flows into the breakfast nook or the more casual dining room/family room combo. Filipinos on the other hand, especially the middle class and the rich, have a cook in residence and the kitchen in the main part of the house is seldom used. Filipino kitchens are not well ventilated and cheerfully curtained. Most of them do not have all the amenities that modern kitchens in the United States have so most cooking is done in the back of the house where the ‘dirty kitchen’ is located.

Many Filipino houses, especially those owned by the wealthy have two kitchens; one for show which is located in the main house and a small no-nonsense kitchen area with cylinder gas-fuelled burner or fire wood stove used for day to day cooking. The so-called ‘dirty kitchen’ is located in an unobtrusive back part of the house used by the hired cook in residence who does most of the cooking. It could also be outdoor to ward off the stinking smell of greasy and fishy odor from permeating the house. For those who can afford modern appliances, the lady of the house sometime ventures to do some special cooking using her modern gadgets. The cylinder gas-fuelled burner or firewood stove is useful during periodic ‘brownouts’ when the electric oven and range become useless. As a practical alternative during frequent ‘brownouts’, the ‘dirty kitchen’ relies on less sophisticated appliances because a hired cook does not really require time and labor-saving gadgets but most likely did not know how to operate the new gadgets and will result in damaging the modern appliances.

Copyright © 2014. By Rosalinda Morgan, Author. All rights reserved. *Why Filipinos have two kitchen* 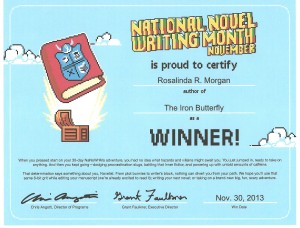 I did it! I am a NANOWRIMO WINNER!!

As you can see, I finished the National Novel Writing Month (NANOWRIMO) Challenge for 2013. It was a great feeling. I worked hard every day, thinking about my story and putting it on paper. I worked steadily putting word after word as I brought my heroine’s story to life. I made the required word count of 50,000 on Nov. 28. I finished today with 56,607 words. I’m proud of myself having achieved my goal.

I planned to take a break in December and then embark on editing the book comes January. The easy part is over. Now the hard part is the next stage. I’m sure I need more details so the book will be longer than it is now as my first draft.

Here’s is a chance for you to know about the Filipino people. Read “BAHALA NA (Come What May), a historical fiction about WWII in the Philippines and how the Filipinos keep their faith to sustain them in times of trouble. “Bahala na!” “Leave it to God!”

Kindle Countdown Deals for “BAHALA NA (Come What May)” continues.

Take advantage of the discounted price at www.amazon.com/author/rosalindarmorgan. Buy the Kindle copy of “BAHALA NA (Come What May)” TODAY.

Take advantage of the discounted price at www.amazon.com/author/rosalindarmorgan.

Learn about the Philippines and the Filipino people and how their faith helps them in their struggle through life. “Bahala Na”, “Leave it to God” is their motto when they are in trouble.

After landing in Leyte on Oct. 20, 1944, General Douglas MacArthur’s troops started the drive to retake the Philippine Islands. When Gen. MacArthur returned, the guerillas were in good number. Some Filipinos went underground and joined the guerilla movement. Some joined the American troops.

A few days after the landing, one of the greatest naval battles in history began on October 23, 1944 when 64 Japanese warships engaged 216 American warships in the Battle of Leyte Gulf. Fighting took place simultaneously in three areas: off Cape Engaño, off Samar, and in the Surigao Strait (south of Samar). This three-day battle, Oct. 23-25, 1944 marked the last use of battle-line formation, in which giant battleships faced and fired on each other at point-blank range.

Kamikaze means “divine wind”. The word was used for the new Japanese suicide pilots of World War II. It recalled the legend of Ise, the wind god who had saved Japan from an enemy invasion in ancient times. This legend was based on an event that happened on Aug. 14 and 15, 1281 when Japan was saved by a famous typhoon that blew away a Sino-Mongol invasion of 3,500 ships with more than 100,000 warriors under the command of the great Kublai Khan of China to invade Japan.

When General Douglas MacArthur left the Philippines in March 1942, he promised “I shall return”. It was 69 years ago today that he made good his promise by returning with an invasion force. The landing, which took place at four spots along a 30-km stretch of coastline on Leyte, involved 700 vessels and 174,000 U.S. servicemen. On October 20, 1944, MacArthur landed in Leyte, fulfilling his promise to the Filipino people by wading ashore at Leyte, but the evening before the Leyte landing, MacArthur spoke through a radio transmitter announcing. . .

“People of the Philippines, I have returned. By the grace of Almighty God, our forces stand again on Philippine soil… Rally to me! Let the indomitable spirit of Bataan and Corregidor lead… The guidance of divine God points the way. Follow in His name to the Holy Grail of righteous victory!”

Gen. MacArthur, wearing his field marshal’s cap, sunglasses and freshly pressed khakis wanted to land on the beach but ran aground in the shallows while still 100 yards from the beach. The commander of the craft could not bring the landing craft in any closer and so an irritated MacArthur accompanied by President Osmeña and their staffs had to wade ashore. It became one of the most famous images of World War II. Upon seeing the newsreels of his landing, MacArthur was so stirred by the picture that he ordered his staffs to arrange for all subsequent island landings to begin offshore so he could walk through knee-deep water onto the beach.

In honor of Gen. MacArthur’s return, I’m giving a FREE DOWNLOAD of “BAHALA NA (Come What May) at Kindle Lending Library on Oct. 20.